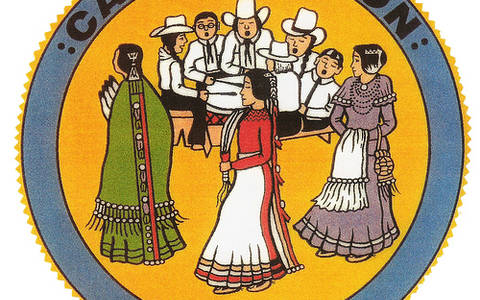 Ancestors of the Caddo people began settling farmstead communities in the present states of Arkansas, Louisiana, Texas and Oklahoma as early as A.D. 800. Long before first contact with Europeans in the 16th and 17th centuries, a strong, well-governed, populous and prosperous Caddo Nation grew from its ancestral root (kee oh no wah, the old ones). In this region they gradually developed earthen mound culture along major rivers, and some of the mound sites in these areas can be seen and toured today. Although they were primarily a southeastern Woodlands people, they also ventured into the plains to hunt buffalo.
Contact with European settlers resulted in the spread of diseases and exacted a heavy toll on the Caddos. In 1855, they were moved to a reserve on the Brazos River in Texas shared with the Anadarkos, Delawares, and affiliated Wichita tribes. Then in 1859, after whites slaughtered seven sleeping Caddos, the government led the Brazos Reserve Indians to refuge in Oklahoma Indian Territory. It's estimated 500 Caddos walked from Texas to what is now Oklahoma - nearly two hundred miles - bringing only what they could carry.
Today, the Caddo Nation preserves, celebrates and shares their culture and heritage via a large repertoire of songs and dances and the Caddo Heritage Museum. Located at the tribal nation headquarters near Binger, exhibits utilize works and items from the museum's holdings which include a vast collection of prehistoric, historic and archival artifacts, photographs, books, manuscripts, video and audio recordings, as well as contemporary art work and Caddo pottery.